The twenty-eight volumes of the Dictionnaire raisonné des sciences, des arts et des métiers, par une societé de gens de lettres (also known as the Encyclopédie) was originally published in Paris between 1751 and 1772. The edition of the Encyclopédie held by Bruce Peel Special Collections was published in Geneva from 1771 to 1776.

As an attempt to gather together and order all of the knowledge of the world, the Encyclopédie is a representative Enlightenment project (Bull 6-9). With its eleven volumes of illustrations created by copperplate engravings, the Encyclopédie also provides an example of how illustrations could be reproduced and disseminated prior to the discovery of photography. The images and texts were printed in separate volumes since they required two different techniques for printing.

Browse the Encyclopédie's articles and plates at the Encyclopedia of Diderot & d'Alembert Collaborative Translation Project. 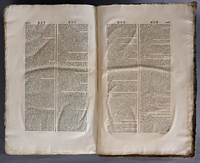