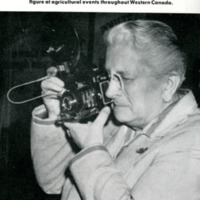 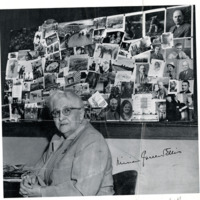 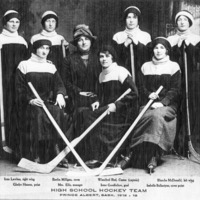 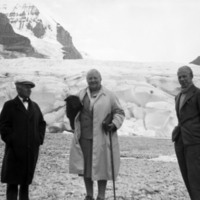 Pioneering agricultural journalist Miriam Green Ellis (1879-1964) exulted in wearing what she called “seven league boots” to visit the farms and families of her huge “Western parish.” Alert, intuitive and keenly observant, she always embraced “the adventure of the unexpected.” The resourcefulness and determination she showed in her 1922 river steamer journey to Aklavik, Northwest Territories, have left us with remarkable textual and photographic images of her passage from the metropole to the periphery. This site samples a wide variety of her adventures and friendships.

Miriam Green was born in Richville, New York, of Canadian parents, who returned to Canada and the paternal farmstead near Athens, Ontario, where this only child went to elementary school. She later attended Bishop Strachan School in Toronto and graduated from the Toronto Conservatory of Music with the A.T.C.M. (Associate of the Toronto Conservatory of Music). The Green family’s move to Edmonton in 1904 was followed by her marriage to George Edward Ellis, who was appointed by Minister of Education Alexander C. Rutherford as Inspector of Schools for the Province of Alberta. When George assumed the principalship of Prince Albert Collegiate Institute in Saskatchewan, Miriam took on the role of manager of the girls’ hockey team. Although they lived apart from 1916, with George teaching in Ottawa and Miriam firmly located in the West, she always published under the name Miriam Green Ellis.

Miriam Green Ellis left her mark in the male-dominated field of agricultural journalism. As Western Editor for 25 years for the newspaper still fondly remembered as a staple in farm homes, the Montreal-based Family Herald and Weekly Star, she visited farmers and farm wives, covered cattle and grain shows, wrote up prize winners and Depression realities–always conveying most concern about the people in and behind her notes. Aware of the struggles of farm families, especially farm wives, interested in all forms of ritual, from the cattle show ring to the Cree Sun Dance, and keen to travel to and document conditions in all areas of the Canadian West, particularly northern and remote ones, she was prescient about the second Klondyke of the oil sands and eager to capture in word and picture the inhabitants of the Land of the Midnight Sun. Affable and tough-minded Miriam Green Ellis, whose career sheds light on the growth, passions, and variety of agricultural journalism, and whose authority, prestige, and suffragist principles solidified her friendship with such Edmonton allies as Emily Murphy and Nellie McClung, deserves to be better known.