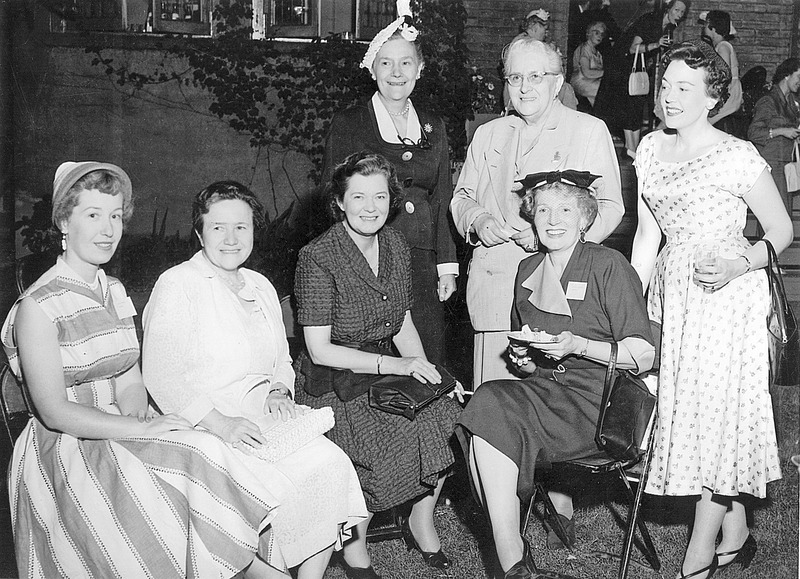 About the Canadian Womens' Press Club

A collection of objects, photographs and documents related to Miriam Green Ellis' involvement with the Canadian Women's Press Club (CWPC).

The CWPC ideals announced in its Constitution, “to improve and maintain the status of journalism as a profession for women and to provide counsel and promote understanding and assistance among press women,” definitely appealed to MGE’s determination to advance opportunities for women. Her lifelong commitment to the Canadian Women’s Press Club reveals remarkable professional and personal loyalties, connecting her to the tradition of Kathleen ‘Kit’ Coleman, co-founder and first President of the CWPC, Nellie McClung, suffragist, social activist, politician, and fiction writer, Violet McNaughton, founder of the Saskatchewan Women Grain Growers, and E. Cora Hind, whom she succeeded as Western Canada’s premier agricultural journalist.

Miriam signed on formally in 1913 as a member of the CWPC and renewed affiliation as a continuous, active member until her death. She served as President of the Edmonton Branch of the CWPC in 1919 and in many subsequent roles for this branch. She arranged the first CWPC regional conference in Edmonton in 1920, served several terms as vice-president of the regional CWPC, as area director for Manitoba, and as chair of the Beneficiary Fund and Memorial Awards board, and wrote a characteristically informal history of the CWPC, Pathfinders, delivered as a talk at the triennial in Edmonton in 1956. Jane Stewart, the Premier’s wife was an officer of the Edmonton branch; when the Stewarts were leaving Edmonton, in early June 1922, for the former Premier’s taking up the position of Minister of the Interior, the Press Club produced a hand-printed and photo-illustrated keepsake album of farewells, including tributes in prose and verse by Emily Murphy, Nellie McClung, and MGE. Photographs of and keepsakes from friends (Emily Murphy, Nellie McClung, Gertrude “Peggy” Balmer, E. Cora Hind, and Violet McNaughton among them) add to the Miriam Green Ellis Collection’s enlivened sense of the West in the first decades of the twentieth century, of a woman making her mark in a male-dominated field, and of the sustaining bonds among press women.

Beginning as a cub reporter for the Prince Albert Daily Herald and the Regina Leader-Post, Miriam moved to Frank Oliver’s Edmonton Bulletin in 1919. Her self-financed trip to Aklavik in June and July 1922 actually launched the next stage of her career. Not only did she publish over 40 articles based on this trip in a variety of venues and deliver Land of the Midnight Sun lantern slide lectures across Canada and parts of the United States, she also secured the position as Western Editor with the Family Herald and Weekly Star.

Her composed pictures of Prairie life offer vivid, idiosyncratic impressions, reflections of a past and a culture that continue to inform our understanding. This posting of a variety of those images provides a window onto that past. For a selection of her writing, including the fiction, see Travels and Tales of Miriam Green Ellis: Pioneer Journalist of the Canadian West, ed. Patricia Demers (University of Alberta Press, 2013).