Jim Carter joined Syncrude in 1979 as manager of Overburden Operations, and he assumed the role as President and COO in 1997. Under his leadership, Syncrude introduced numerous new technologies and processes that have resulted in both incremental and revolutionary advances in productivity, safety, and environmental performance. Carter is the founding chair of the Industry Advisory Committee of Mining at the U of A School of Mining and Petroleum Engineering. 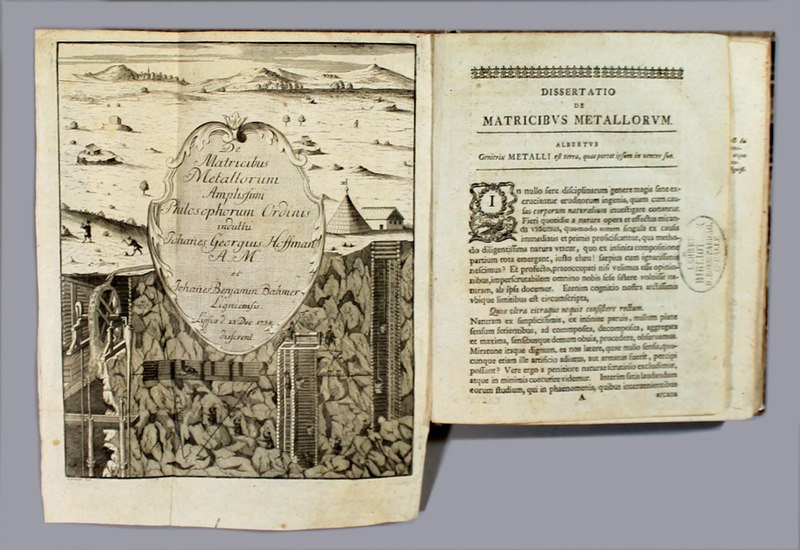 In this interesting, very rare first edition, the authors consider the origin of metals and gems, the reason for the erratic distribution of metals and gems throughout the earth’s crust, and the kinds of metals and gems found in various parts of the world. The finely engraved fold-out title page depicts a cross-section of a mine with shafts, machinery, and miners at work. [QE 362 H64 1738]

Bill Comrie is the founder, owner, and chairman of the Brick Warehouse Corporation. The Brick is the largest furniture chain in Canada with over 75 locations and more than 5,000 employees. Comrie's creative financing option, which allows the customer to delay payments for over one year, broke new marketing ground and has since been adopted by scores of other major retailers in North America. 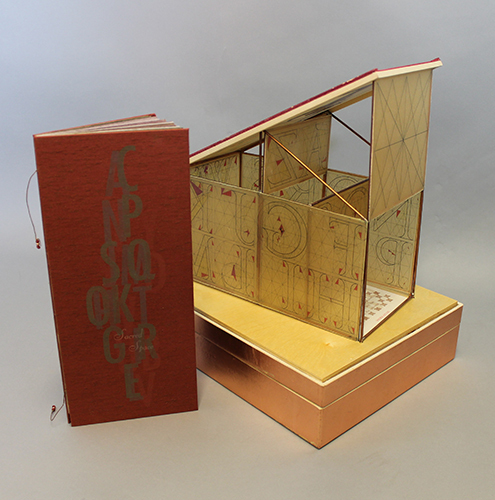 This visually stunning artists' book contains traditional book elements. It has a text, printed by letterpress, a process in which individual letters are set by hand. Morin has used reduction lino prints as well as typographic illustrations – over-printing letterforms to make a whole that is more than the individual letters. The book contains the components of a three-dimensional model chapel, which requires assembly by the reader. [N 7433.4 M699 A6 S33 2003 folio]

Nellie Cournoyea of Tuktoyaktuk, Northwest Territories, was a founding member of the Committee of Original People's Entitlement, which pursued a comprehensive land claim settlement between the federal government and the Inuvialuit of the Western Arctic. In 1979, she was elected as Member of the Legislative Assembly of the NWT. Cournoyea became the first Aboriginal woman in Canada to lead a provincial or territorial government when she served as Premier of the Northwest Territories from 1991 to 1995. 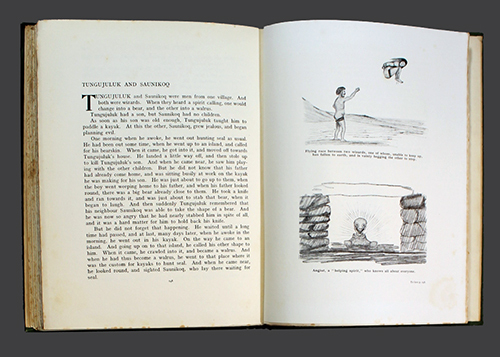 The noted Inuit/Danish ethnographer who spent thirty years exploring the Arctic regions and conducting ethnological studies of Inuit life and culture collected this rare anthology of folk-tales. One of his most important achievements was to gather and document folk-tales, songs, and poetry in order to make them available to a wider audience. There are only two recorded copies of this book in Canada, and it is a welcome addition to the Peel library’s Javitch Collection of books about the Aboriginal peoples of North and South America. [E 99 E7 R376 E85 1921]

Dick Harington, distinguished U of A alumnus, is a pioneer and leader in the study of Canadian ice age vertebrate fossils and their environments. With the help of First Nations Peoples, farmers, geologists, and museum professionals across Canada, he expanded the national collection of Canadian ice age vertebrates from under 100 specimens in 1965 to over 40,000 today. Harington received the Massey Medal in 1987 and is a Fellow of both the Royal Geographical Society and the Arctic Institute of North America. 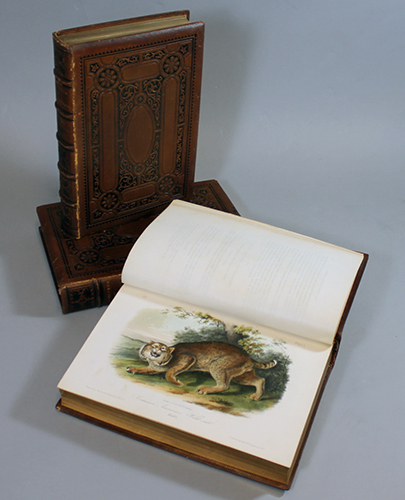 Quadrupeds of North America was first published in three very large (called "elephant folio") volumes between 1845 and 1848. The present edition includes all 155 brilliantly hand-coloured lithographed plates of the original edition reduced by means of the camera lucida. Audubon’s sons, John W. and Victor were responsible for seeing it through the press as the author was in declining health during its preparation and died in January of 1851 before the project was completed. Despite many publication difficulties, the result was the most naturalistic depiction of American mammals published to that time. [QL 715 A93 v.1-3]

Arthur Kroeger, distinguished U of A alumnus, has contributed immeasurably to government, public policy, and volunteerism across the country in a career spanning 45 years (34 in public service). He joined the Treasury Board Secretariat in 1971 and served as Deputy Minister in a number of federal departments between 1975 and 1992. Kroeger is a Companion of the Order of Canada and recipient of numerous awards. 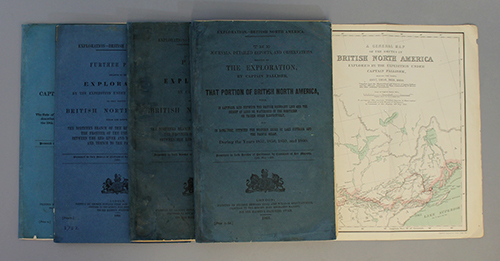 In their original paper wrappers, these four volumes contain the journals, detailed reports, and observations of Captain Palliser who commanded a British government expedition sent to explore the region between the Red River and the Rocky Mountains and from the North Saskatchewan River to the American border. The goal was to assess the agricultural potential of the area and to advise on the practicability of a transcontinental railway. The expedition’s reports and its comprehensive map were for many years the major source of information about the vast area of country between Lake Superior and the interior of British Columbia and are still of value to historians today. [FC 3213 P168 1865b folio]

Working under life-threatening conditions for the past two decades to advance the lives of women and children in Afghanistan, Sima Samar is recognized as an advocate for education and human rights. She was the first woman from the Hazara ethnic minority to graduate with a medical degree from Kabul University (1957). A recipient of numerous prestigious awards including the 2002 John Humphrey Freedom Award and the 2004 John Mann Award for Human Rights, Samar is laying a new foundation for the future by training a generation of female doctors and medical workers. 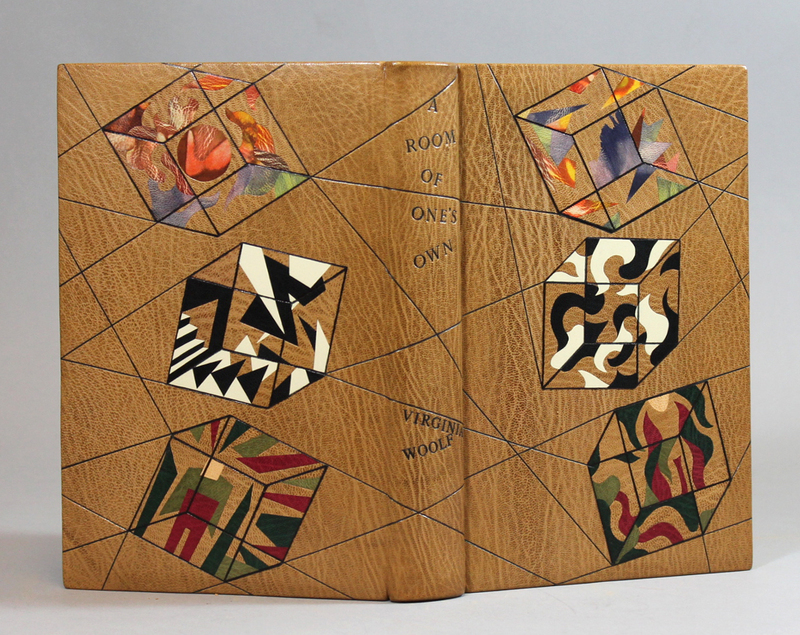 Woolf, Virginia. A Room of One's Own, and Other Essays. London: Folio Society, 2000.

A Room of One's Own, and Other Essays

This beautiful new edition of Woolf’s classic essays is illustrated with coloured reproductions of paintings by noted artists of the author’s circle ­ including her sister, Vanessa Bell. The unique binding in full morocco leather with inlays of various colours is by the talented young English design binder Andrew Brown. The blocks of colour are connected to each other by black tooled lines and represent to the binder the various compartments and interconnectedness of Woolf’s mind. [PR 6045 O59 R7 2000]

The Right Honourable The Lady Soames

The Right Honourable Mary, Lady Soames, Dame Commander of the British Empire, is the youngest surviving child of Winston and Clementine Churchill. She has served as Justice of the Peace (1960-74), UK Chair of the International Year of the Child (1979), and Chair of the Royal National Theatre (1985-95). In 1979, Lady Mary Soames published a life of her mother Clementine Churchill, which won the Yorkshire Post Prize for the Best First Work and a Wolfson Prize for History. 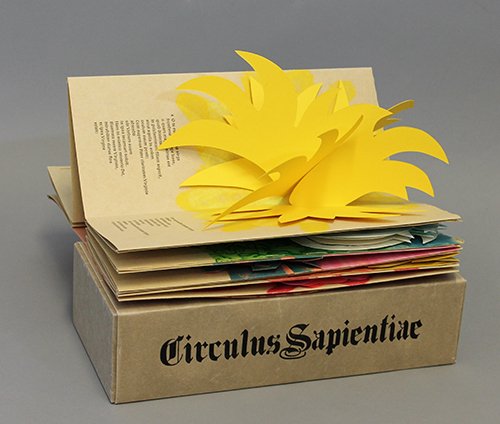 A visual representation of songs by mediaeval visionary abbess Hildegard von Bingen, Circulus Sapientiae (Circle of Wisdom) was created in honour of the nine hundredth anniversary of the abbess’ birth and inspired by her music. The Latin text of twelve songs from the Symphony of the Harmony of Celestial Revelations are presented in a seven-spread accordion binding. A CD of hymns from the symphony, performed by Anima, a Vermont-based ensemble dedicated to the study and performance of mediaeval music, is included. This dynamic pop-up book is accompanied by a booklet containing an English translation. [N 7433.4 V3 A6 S989 folio]

Her Imperial Highness Princess Hisako Takamado of Japan is a remarkable woman who has consistently stressed the importance of understanding and preserving the environment and of educating the world's children. The Princess worked closely with the Icebridge Forum of Cambridge University, an organization of concerned educators and scientists that promotes knowledge of the oceans and Polar Regions. Through her local, national, and international efforts, Princess Takamado has inspired and encouraged global citizenship and the value of respect for others. 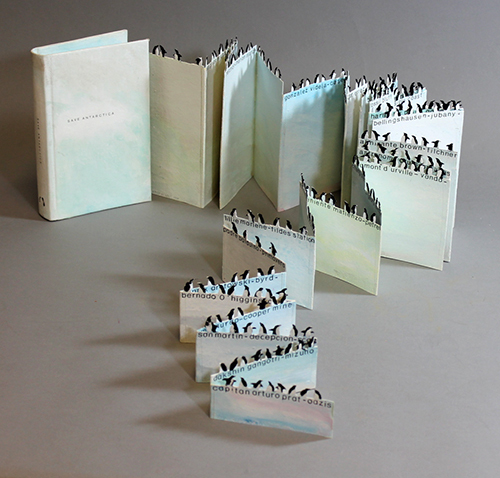 This intriguing artists' book consists of a folded leaf in an accordion binding that unfolds to display a multilevel ice landscape topped with a colony of tiny penguins. The names overprinted in deep black below the penguins’ feet are a sampling of the numerous international Antarctic research stations that crowd the continent. [N 7433.4 M873 A6 S267 1998]