John Bell is the Regius Professor of Medicine at Oxford University in the UK and is an acknowledged leader in the rapidly expanding field of immunogenetics. A native Edmontonian and alumnus ('75 BSc), he was in his second year of medical training when he was awarded a Rhodes Scholarship to Oxford. Bell has led numerous research initiatives at Oxford including the Wellcome Trust Centre for Human Genetics; The Oxford Vaccine and Tropical Medicine Centre; and the Oxford Centre for Diabetes, Endocrinology, and Metabolism. 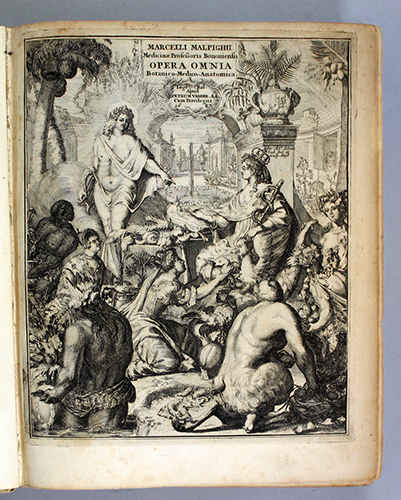 One of the great renaissance biological and medical scientists, Marcello Malpighi is responsible for our knowledge of the anatomy of tissue. He was one of the first scientists to make use of the microscope and the first to demonstrate the vesicular structure of the lungs, as well as the existence of capillaries in the lungs. More than anyone else he was the pioneer of microscopic anatomy, a tireless investigator, unshakable in his defence of the truth. This is an extremely good copy of the second edition of his collected works, extensively illustrated with 118 copper-engraved plates. [QH 41 M35 1687]

Margaret (Marmie) Hess was an instructor at the Provincial Institute of Technology, now the Alberta College of Art, and later at the Banff School of Fine Arts. An evolving passion for indigenous peoples led her to Canada's north where she discovered Inuit art and in 1970 she established Calgary Galleries Ltd. Hess played a leading role in the establishment and governance of several of Alberta's museums, universities, and other cultural and educational institutions. 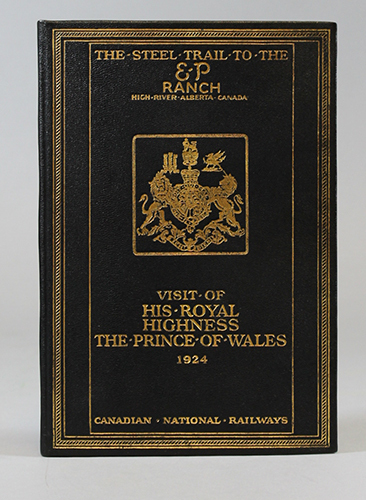 Visit of His Highness the Prince of Wales, Canada 1924

In September 1924, the Prince of Wales visited his ranch, the E.P., in High River, Alberta. This extremely rare volume charts his travels by train from New London, Connecticut, to Montreal, Quebec, and then across Canada to Calgary from September 14 to 18. This detailed annotated time table describes the communities through which he passed, naming all the stations and arrival times. Handsomely bound in navy morocco leather, this is a unique souvenir of a bygone era. [FC 223 R6 1924 C36 1924]

Linda Hughes is a leading figure in Canadian media and communications. She joined the Edmonton Journal in 1976 covering provincial politics, and by 1992 she became the president and publisher. Under her direction, the Journal attained a reputation for excellence and has received numerous awards. In 1994 Chatelaine Magazine named Hughes as one of the most influential women in Canada. 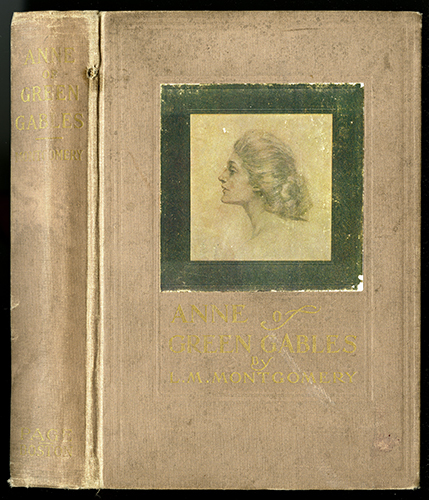 Lucy Maud Montgomery wrote her first novel in 1904-05, and it was rejected by five Canadian publishers before being accepted by the American publisher Page in 1908. (The first Canadian edition appeared in 1943.) It is perhaps the best-selling book in Canadian literature and surely the most beloved. It has never gone out of print. The story of the delightfully talkative redheaded orphan from Prince Edward Island, Anne Shirley, seeking her place in the world has won readers from all over the world. This edition is extremely scarce. [PS 8475 O594 A75 1908]

Lieutenant-General (Retired) Donald Mackenzie had a distinguished 36-year career in the Canadian military and has since achieved great distinction in the business world. His outstanding military career saw him appointed Deputy Commander in Chief of the North American Aerospace Defense Command (NORAD), the highest international appointment an air force officer can achieve. A U of A alumnus, Mackenzie has been a strong supporter of his alma mater and established the Donald and Margaret Mackenzie Distinguished Teaching Awards for Teaching Excellence in the School of Business. 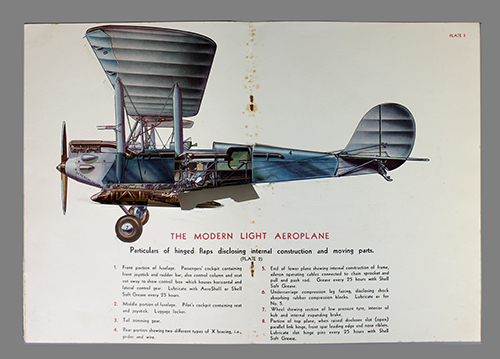 The purpose of this fascinating work is “to give a graphic and clear exposition of the principles of construction of the engine and the air-frame.” A first edition, it contains four colour-printed plates with overslips that fold back to reveal some 35 different component parts of a 1930s biplane. A vivid and uncommon volume in fine condition with the original photographically illustrated wrappers by Maurice Beck. [TL 671.6 M66 1930]

Judge Lloyd Malin is an outstanding Edmontonian who has distinguished himself in both legal and community circles. Recently appointed to the Edmonton Criminal Division of the Provincial Court of Alberta, he previously had a long and distinguished career with the national law firm Fraser Milner Casgrain LLP and was appointed Queens Counsel in 1987. During his career, Malin has served his university ('65 BA, '70 LLB) with distinction and commitment as president of Alumni Council and as member of the Senate and Board of Governors. 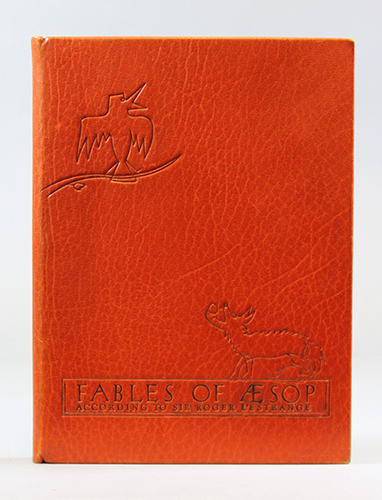 The Fables of Aesop

With fifty evocative illustrations by Alexander Calder (1898-1976), the great American artist/sculptor who invented the mobile and was renowned for his charming illustrations of animals, L’Estrange’s 1692 translation is a classic in English literature, one that has delighted generations of readers young and old. This edition is an important addition to the library’s collection of books published by notable presses and is a special expression of the book arts. [PA 3855 E5 L642 1931]

Douglas McNally is a native Edmontonian and highly regarded for his contributions to developing and implementing community-based programs serving children, youth, and families locally, nationally, and internationally. A member of the Edmonton Police Service for 28 years, he retired in 1995 after serving as Chief of Police for five years. In 1995, McNally became CEO of the Edmonton Community Foundation, which currently distributes $5.4 million annually to charitable groups for critical programs such as literacy, early childhood development, affordable housing, and the arts. 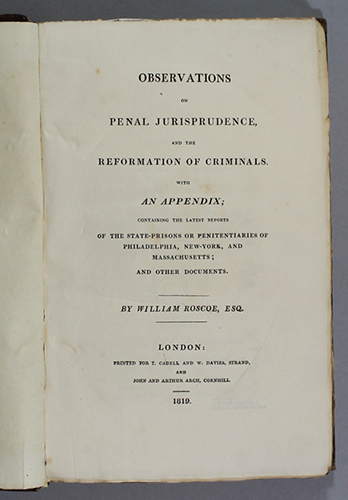 Roscoe, William. Observations on Penal Jurisprudence and the Reformation of Criminals, with an Appendix, Containing the Latest Reports of the State-Prisons or Penitentiaries of Philadelphia, New-York, and Massachusetts, and Other Documents. London: T. Cadell and W. Davies, 1819.

Through a close examination of the condition of penitentiaries in England, America, and Europe, the author thoughtfully concludes that, “instead of connecting the ideas of crime and punishment, we ought rather to place together the ideas of crime and reformation.” The work includes prison reports from several cities, statistical data, charts, etc. A fine presentation copy of the first edition, it is inscribed: “The R. Hon. Lord Crewe from the author.” Baron Crewe was a devoted Whig member of Parliament. [HV 8661 R67 1819]

Charles Stelck, a former U of A geology professor, is a renowned Canadian paleontologist and statigrapher whose pioneering research in Western Canada's sedimentary basin has proved to be of immeasurable value in the research for oil and gas. He established the geological setting of some of the most important oil fields in Alberta. Among Stelck’s numerous awards are his election to the Royal Society of Canada (1960), the Logan Medal of the Geological Association of Canada (1972), its highest award, and his appointment as an Officer of the Order of Canada in 1997. 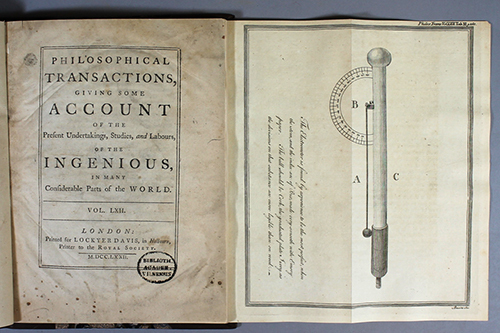 Priestley, Joseph. Observations on Different Kinds of Air. London: Printed for Lockyer Davis, in Holbourn, printer to the Royal Society, 1772.

Observations on Different Kinds of Air

This is a first edition of Priestley’s landmark paper announcing the discovery of hydrochloric acid and nitric oxide - and the use of the latter in measuring the purity of air, a discovery for which Priestley received the Copley medal. This discovery led, through the work of Cavendish, Fontana, and others, to exact eudiometry. The edition is a fine copy of a major scientific treatise, handsomely bound. [QC 161 P74 1772]

Benjamin Torchinsky has made contributions to a broad spectrum of engineering-related fields including developing most of the initial cable television systems in Western Canada dating back to the 1950s. He founded AGRA Industries, which built and operated the first rapeseed crushing plant in Canada and pioneered the installation of deep foundation caissons in western Canada for bridges and other heavy structures in the 1970s. Torchinsky is the recipient of numerous awards and a member of several national and international professional organizations. 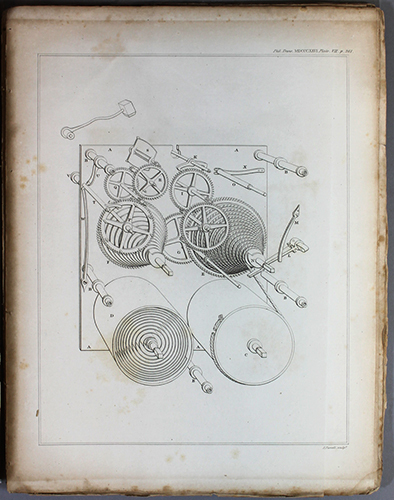 Babbage, Charles. "On a Method of Expressing by Signs the Action of Machinery." Philosophical Transactions of the Royal Society 116.3 (1826):

"On a Method of Expressing by Signs the Action of Machinery"

Robert Morris was a major architectural theoretician as well as being a practitioner. He was a key figure in the rise of the English Country House in the eighteenth century. In this volume, the scarce first edition, Morris sets the rule for a “modern” approach to the design of the country house on the principles of “convenience, proportion, and regularity.” This copy is bound with two other important works of the day, The Builder’s Magazine (1774), and Timothy Lightoler’s Gentleman and Farmer’s Architect (1762). All three have numerous engraved plates. [Q 41 R88 v.116: pt.3 1826]