Tom Brzustowski, president of the Natural Sciences and Engineering Research Council of Canada (NSERC), has had an exemplary career as a scholar, academic administrator, senior government official, and international leader for the support of engineering and science research in Canada. Brzustowski’s tenure at NSERC has been marked by a remarkable increase of industry support for research and innovation in universities, and NSERC programs supporting the education and training of highly qualified personnel have flourished. 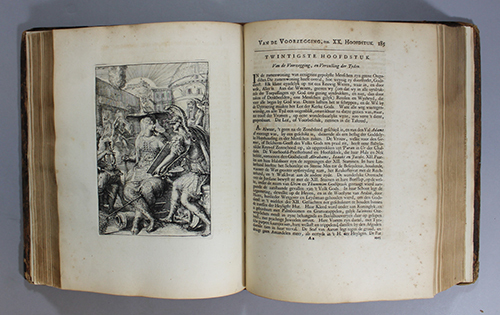 Lavishly illustrated with 64 etched plates, woodcuts, and ornaments by the author-illustrator, this is the first edition of a rare and scholarly description, history, and analysis of classical mythology and Christian symbolism. The work is an important addition to the Peel library’s holdings of early European cultural classics. [NE 1680 H77 1735]

Known as "The Great One," Wayne Gretzky was selected as “The Greatest Hockey Player of All Time" by The Hockey News on January 9, 1998. During his illustrious career, he won four Stanley Cups, played 19 all-star games, won nine MVP awards, and established 61 NHL records. Gretzky was appointed as an Officer of Canada in 1984 and inducted into the Hockey Hall of Fame in 1999. 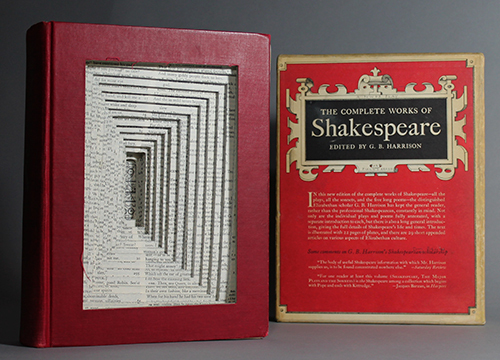 Commissioned by the Peel library in honour of Wayne Gretzky, this is a unique and playful altered book by an important book artist who grew up in Hamilton, Ontario. Taking an edition of Shakespeare’s complete plays, Douglas Beube has physically cut it to create a miniature theatre and hockey arena, playing on the character Puck from A Midsummer Night’s Dream and the puck associated with hockey. The various phrases remaining represent spoken lines in the play and voices of audiences and sportscasters shouted down to actors and athletes. The word/name PUCK appears in the fourth line from the bottom, and in the second line from the top it reads, “And many giddy people flock to him.” The single page, with words drilled out, is now the goalie’s net and at its bottom is the number 99. When the page is put over the book’s text, the viewer must peer in to see the arena. This is an imaginative, lively and personal tribute to a Canadian sports legend. [N 7433.4 B566 A6 P977 2000]

Her Honour, the Honourable Lois Hole, Lieutenant Governor of Alberta, has served as school trustee, as a director of the Farm Credit Corporation, and as Honorary Chair for the 27th Canadian Congress on Criminal Justice and for the Children's Millennium Fund. She is the author of eight gardening books, all Canadian bestsellers. In 1999, Hole was appointed a member of the Order of Canada, and, in February of this year, she was installed as the 15th Lieutenant Governor of Alberta. 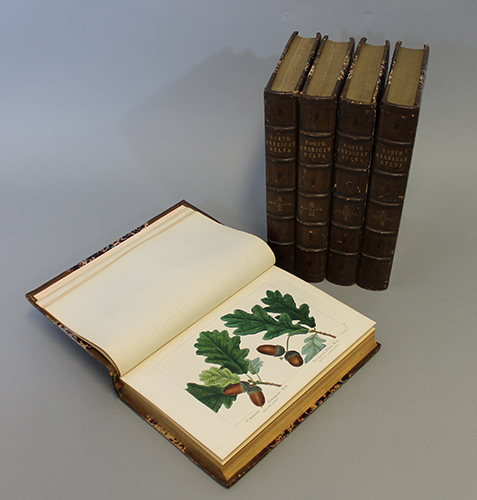 Michaux, François André. The North American Sylva; or, A Description of the Forest Trees of the United States, Canada, and Nova Scotia, Considered Particularly with Respect to their Use in the Arts, and their Introduction into Commerce; To Which is Added a Description of the Most Useful of the European Forest Trees. Philadelphia: W. Rutter & Co., 1865.

This is the most complete work of its kind, and of unrivalled beauty, with 277 hand-coloured plates depicting the varying leaves of North American forest trees. A landmark set with exceptionally fresh and clean illustrations, it is of great value to botanists and lovers of the book arts. [QK 481 M622 1865 v.1-5]

Lou Hyndman, former Chancellor and alumnus of U of A, was elected to the Legislative Assembly of Alberta in 1968 and won re-election four times. He served as Minister of Education, Minister of Federal and Intergovernmental Affairs, Government House Leader, and Provincial Treasurer. Hyndman was appointed an Officer of the Order of Canada in 1993. 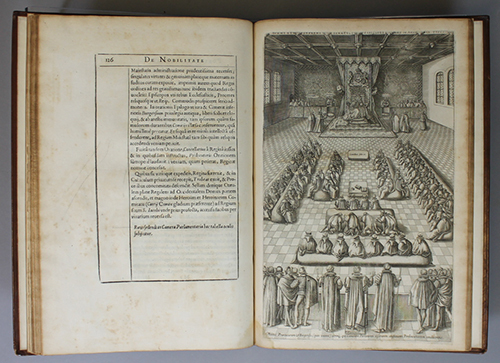 This handsome volume contains nine full-page engravings, woodcut ornaments, and initials, and the bookplate of the Duke of Kent [1664-1740]. Robert Glover was one of the most accomplished of English heralds and genealogists, and this rare, scholarly volume illustrates the costumes of the English nobility: baron, viscount, duke, and others, as well as Queen Elizabeth enthroned. This volume will be of great use for students of English history and historical costume. [CR 3891 G883 1608 folio]

A petroleum geologist, Arne Rudolph Nielsen has made significant contributions to both Alberta and Canada as an oil finder. A native Albertan and U of A alumnus, he joined what was to become Mobil Oil upon graduation where his innovative and academic approach to oil exploration resulted in the discovery of the Pembina oilfield, the largest in Canada, followed by several fields in Saskatchewan. Among Nielsen’s awards are honorary memberships in Canadian Association of Petroleum Producers and American Association of Petroleum Geologists. 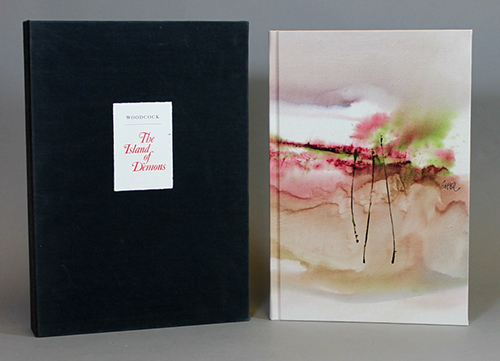 Woodcock, George. The Island of Demons, A Verse Play Based on a Canadian Legend. Lithographs by Ray Cattell.

The Island of Demons

This dramatic poem involves adventure, love, and a range of emotions amongst sixteenth-century castaways on a mysterious island near Newfoundland. The poem, based in part on a Native legend, has never before appeared in print though it was produced by the CBC in 1956. Woodcock, who died in 1995, was one of Canada’s great men of letters. This sumptuous volume thus contains both a significant Canadian text and an outstanding example of fine Canadian bookmaking. [PS 8545 O615 I82 1998]

James Stanford is the Chairman of Petro-Canada and U of A alumnus. He began his career with Petro-Canada in 1978 as general manager, conventional production, and, by 1990, he had been appointed president and added the title CEO in 1993. Stanford's many contributions in the area of community service include membership on the Business Council on National issues, the Council for Canadian Unity, and the Alberta Performing Arts Stabilization Board. 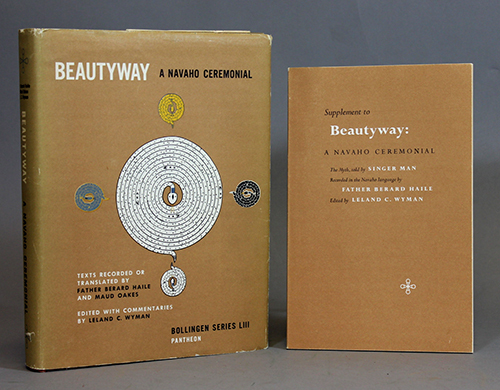 A surprisingly scarce volume, this tome documents a Navaho healing ceremony for women that is traditionally performed over nine nights, including a main narrative chant, many songs, and the creation of 23 symbolic sand paintings, with a fire dance on the final night. The remarkable poetry and elaborate mythology of this ceremony can only be appreciated through this sympathetic and exhaustive study. A major addition to the Peel library’s Gregory S. Javitch Collection of materials relating to the Aboriginal peoples of North and South America. [E 99 N3 W94 1957]

Alumnus Jozef Straus is the co-chairman, president, and COO of JDS Uniphase Corp, a high tech company that employs over 10,000 people world wide, has 15 manufacturing facilities in eight countries, and had over $1 billion in sales in 1999. JDS Uniphase designs, develops, manufactures, and distributes a comprehensive range of optical components and modules for the fibre optic communications market. 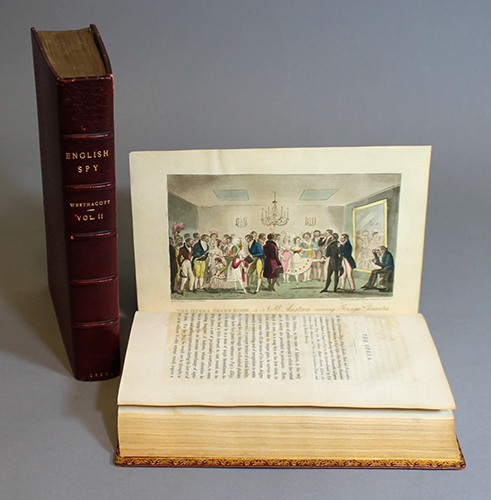 Westmacott, C. M. The English Spy: An Original Work, Characteristic, Satirical and Humorous, Comprising Scenes and Sketches in Every Rank of Society, Being Portraits of the Illustrious, Eminent, Eccentric and Notorious.

Lavishly illustrated with 71 hand-coloured acquatints by Robert Cruikshank, plus many other pictures, this extraordinary work is a veritable "chronique scandaleuse" of the Regency era in early nineteenth-century England. It contains vivid and witty portraits and sketches of "the Illustrious, Eminent, Eccentric, and Notorious" in Eton, Oxford, London, Bath, and fashionable society. An unrivalled and entertaining portrait of a flamboyant era in English history. [DA 485 W532 1825 v.1-2]

The Most Reverend Desmond Tutu

The Most Reverend Desmond Tutu has lived an outstanding life as a spiritual church leader and a peace and human rights activist. During his tenure as General Secretary of the South African Council of Churches (1978-1985), he became an international figure for his outspokenness against the injustice of apartheid. Archbishop Tutu received the Nobel Peace Prize in 1984, and he led South Africa through the post-apartheid transition through his work as Chairperson of the Truth and Reconciliation Commission. 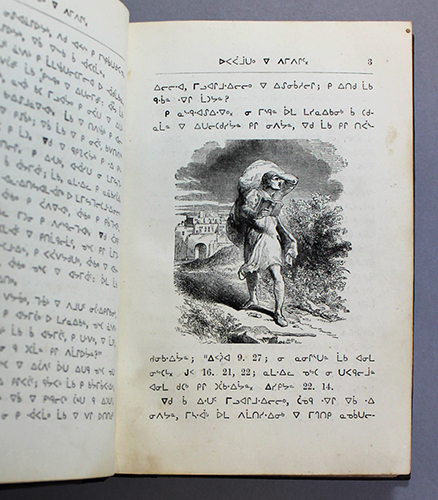 Bunyan, John. The Pilgrim's Progress; Translated into the Language of the Cree Indians in the Diocese of Moosonee by Archdeacon Vincent of Albany; Approved After Thorough Examination by the Bishop of Moosonee. London: The Religious Tract Society, 1886.

This rare Cree translation of John Bunyan’s beloved seventeenth-century Christian narrative of adventure and salvation is a significant addition to two major library collections. The first comprises the most important Bunyan collection in Canada, including some 80 early editions of The Pilgrim’s Progress, published before 1800, as well as more than 20 translations. The second features works translated into languages of the First Nation peoples of Canada, many of which are found in the Javitch and Rutherford collections. [PR 3330 A72 1886]