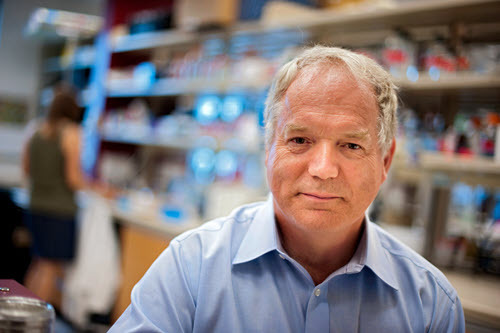 Restrictions associated with the COVID-19 pandemic led the University of Alberta to hold 2020 Convocation ceremonies online.

The awarding of honorary degrees to those selected to receive them in the spring of 2020 was postponed in the hope that they could safely be awarded at an on-campus Convocation ceremony in the not-to-distant future. Librarians in Bruce Peel Special Collections look forward to selecting special books in their honour when this occurs.

Rather than awarding Honorary Degrees during the virtual Convocation ceremony in the fall of 2020, the University of Alberta celebrated one of its own—Nobel Laureate Dr Michael Houghton—announcing that Dr Houghton would receive an Honorary Degree in person at a future date.

Michael Houghton was awarded the 2020 Nobel Prize in Physiology or Medicine in recognition of his discovery of the hepatitis C (HCV) virus. His discovery, with colleagues Qui-Lim Choo and George Kuo, in 1989 opened a new field of viral hepatitis research that led to improved blood safety and hepatitis C treatment to the point where the viral infection can now be cured in virtually all patients. From this discovery, new screening tests were developed for blood donations, and, by 1992, the virus was virtually eliminated from the blood supply. Houghton was recruited to the University of Alberta in 2010 as the Canada Excellence Research Chair in Virology in the Li Ka Shing Institute of Virology. Two years later, he and his team developed a vaccine for the virus that is known to cause cirrhosis, end-stage liver disease and liver cancer. The vaccine is now in the late pre-clinical stage of testing. Houghton recently began leading an effort to produce a vaccine for COVID-19. He had also created a successful vaccine for the SARS-CoV-1 virus in 2004, but it was never needed. 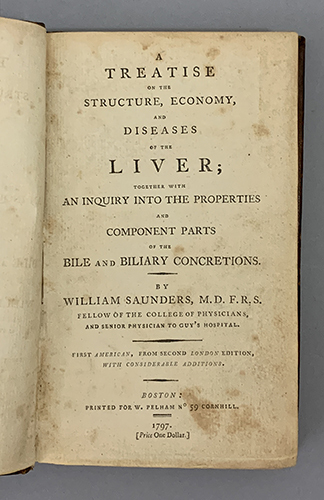 William Saunders. A Treatise on the Structure, Economy, and Diseases of the Liver. Boston: W. Pelham, 1797.

A Treatise on the Structure, Economy, and Diseases of the Liver

William Saunders (1743–1817) completed his medical training in 1765 at the University of Edinburgh where he wrote his thesis on the medicinal application of antimony. He had a long and distinguished career as a physician at Guy’s Hospital in London, and in 1793 his achievements to advance medical knowledge were recognized when he became a Fellow of the College of Physicians. This first American edition copy of Saunders’ influential work on diseases of the liver is fully bound in calf leather. [RC 845 S25 1797]