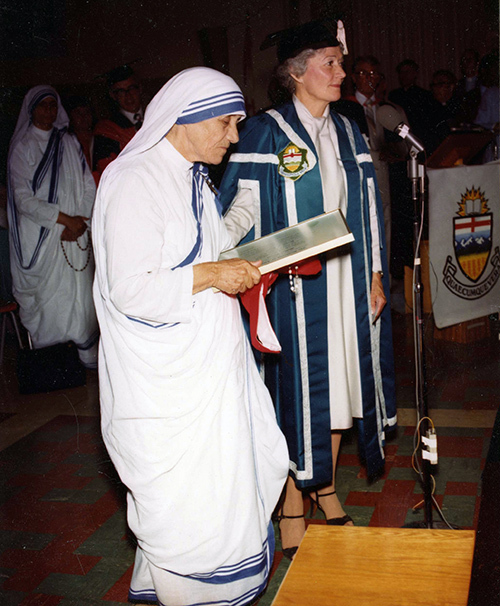 This exhibition uses forms of names by which honorary degree recipients are commonly known, such as Rick Hansen rather than Richard M. Hansen, and styles of address that are in keeping with the principles established for library catalogues and by the Government of Canada. For example, a former Prime Minister of Canada would be shown as "The Right Honourable," while the Premier of a Canadian province retains the "Honourable" title only while in office and a member of the House of Commons retains the "Honourable" title for life only if he or she was also a member of the Queen's Privy Council. We apologize for any errors and we would welcome corrections addressed by email to bpsc@ualberta.ca.

Bibliographic information has been formatted according to standards set by the Modern Language Association (MLA Handbook, 7th edition), including the rules of capitalization which differ depending on language.

Images in this exhibition may be reproduced on the condition that proper copyright permissions have been obtained (if applicable) and that the following citation is displayed with the image: “Image courtesy of Bruce Peel Special Collections, University of Alberta.”

← A Long-Term Partnership
Thanks to all contributors! →
About this Exhibition