In April 2021, U of A Chancellor Peggy Garritty announced, "Four Edmontonians whose distinct and equally noble efforts to help others have made their hometown, province, and country a better place will receive Honorary Degrees as part of the University of Alberta's virtual graduation ceremonies this June."

U of A alumna and former associate Dean of Medicine Ruth Collins-Nakai is a cardiologist and physician leader from Pincher Creek, Alberta. After completing her medical degree at the U of A and fellowship at Harvard, Collins-Nakai came back to Edmonton where she enjoyed a 24-year academic career at the university and an additional eight years working in cardiology clinics. Along the way, she established the Heritage Pediatric Cardiology Program, the precursor to the U of A’s successful congenital heart program, which now serves Western Canada. She also introduced ultrasound of the heart and helped establish an infant heart surgery program. She advocated for research into early child development and led efforts to introduce airline smoking restrictions. A former president of the Canadian Medical Association, Collins-Nakai also influenced research and clinical practices worldwide as the first Canadian to head two of the leading bodies in her field: the American College of Cardiology and the Inter-American Society of Cardiology. She was inducted into the Order of Canada in 2016. 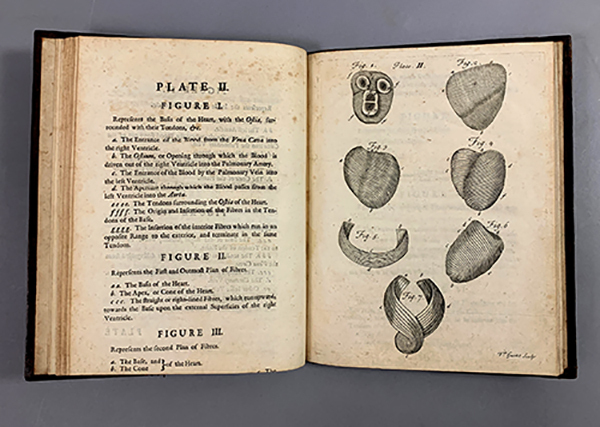 A Mechanical Essay upon the Heart

William Wood’s medical treatise is one of the earliest published works in English on the heart, making it one of the most sought-after titles for collectors who acquire rare books about this subject. Describing the heart as a “wonderful Machine” (6), Wood explains that it is also “the principal and most noble Bowel of the whole Body, is a strong compacted Muscle composed of Arteries, Veins, Nerves, Lymphaticks, a Membrane, and fleshy Fibres” (3). This copy of Wood’s book is bound with James Douglas’s study of the peritoneum (A Description of the Peritonæum, and of That Part of the Membrana Cellularis Which Lies on Its Outside. J. Roberts, 1730.), a part he describes as the “investing Membrane of the Abdomen” (4). Both works are bound together in speckled calf leather with gilt borders on the covers. [QP 101 W66 1729]

Salma Lakhani was installed as Alberta’s nineteenth Lieutenant-Governor on 26 August 2020, the first person of Muslim faith and South Asian descent to be appointed to the position. Her career of service has been guided by her commitment to the values of pluralism and inclusion and to championing those who face barriers in life. Lakhani also has a deep-seated love of education, seeing first-hand how it can change people’s fortunes. After the government of her home country of Uganda expelled all people of Asian descent in 1972, it was her family's focus on education and her post-secondary studies in Britain that gave her a future. In 1977, she and her husband Zaheer came to Edmonton, where Zaheer continued his medical studies at the U of A. Lakhani helped to manage her husband’s cardiology practice while operating a business focused on early childhood education. Wanting to give back to the community that welcomed her, Lakhani became one of the first mentors in NorQuest College’s Youth in Transition program, providing guidance for students learning English as a second language. She also shared her skills, energy and passion for service with the Lois Hole Hospital for Women, Kids Kottage, Sorrentino’s Compassion House, the Alberta Cancer Board, the Zebra Foundation, the Aga Khan Foundation Canada, and the John Humphrey Centre for Peace and Human Rights. She has received the Alberta Centennial and Queen’s Diamond Jubilee Medal in recognition of her service to the community and civil society, and was inducted as a member and chancellor of the Alberta Order of Excellence upon her appointment as lieutenant-governor of Alberta. 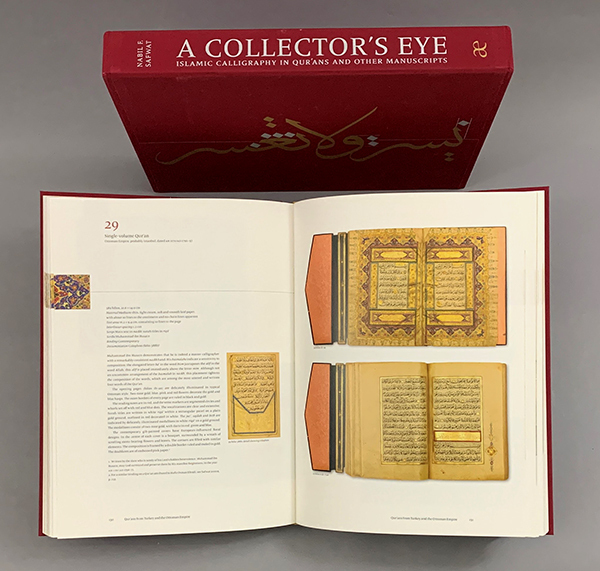 A Collector’s Eye: Islamic Calligraphy in Qur’ans and Other Manuscripts

A magnificent folio volume showcasing Islamic calligraphy in manuscript books and documents, described in detail and illustrated in colour. Both a celebration and an authoritative scholarly resource, this beautiful first edition is in fine condition, with its original red cloth binding decorated with calligraphy in silver and gold, and housed in a matching slipcase. [NK 3636.5 S24 2010 folio]

U of A engineering alumnus Reza Nasseri founded Landmark Homes in 1977 and has used his success to lead the push for sustainability in the homebuilding sector and make lasting contributions to community initiatives. He created the Landmark Community Care Program, which has been the source of more than $21 million in contributions to a wide range of social, education, and community programs. He spearheaded the House of Hope program, which unites homebuilders and suppliers to build homes, and, over the last 25 years, has raised $1.8 million from their partner suppliers and trades for the U of A Hospital Foundation. Nasseri is also an ardent supporter of the arts in Edmonton, and his family’s philanthropic passion revolves around providing support for women, children and vulnerable populations. Nasseri was inducted into the Alberta Order of Excellence in 2010 and appointed to the Order of Canada in 2018. 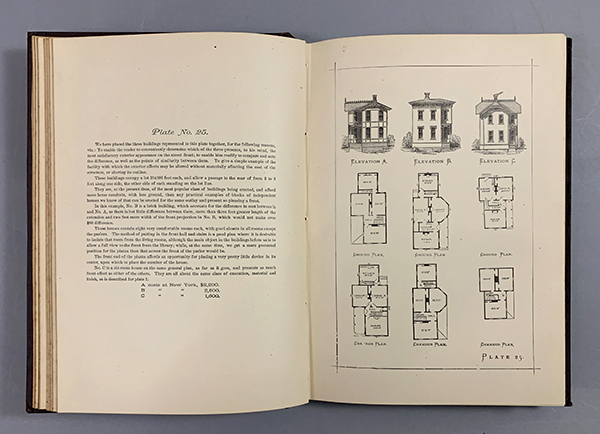 In his introduction, architect Elisha Hussey explains that his principal aim is “to put a work in the hands” of people who want “to apply their energies and skills to this most noble calling of life, ‘Home Building’” (iii). The resulting book explores a range of topics, from “Bath-Room Furnishings” to “Heating and Ventilation” and from “Pump and Sink” to “Water Closets” (v-vi). It also includes 42 colour illustrations of houses, each accompanied by an architectural description, a floor plan, and the cost of construction. Hussey reveals that the costs to build these “original designs” in New York range from $1000 for a modest cottage (plate 4) to $17000 for a grand two-storey French-roof villa (plate 37). This first edition copy of Home Building is bound in the original publisher’s brown cloth with gilt lettering and ornamentation on the front cover and spine. [NA 7207 H97 1875]

Cheryl Whiskeyjack has committed her life to going above and beyond in her work to help vulnerable populations and to bridge Indigenous and non-Indigenous relationships among a wide range of community groups and organizations. Whiskeyjack began her career as a youth worker in 1994 at the newly opened Bent Arrow Traditional Healing Society, which provides programs and services for Edmonton’s urban Indigenous youth. She has grown with the organization and is now its executive director, overseeing 100 staff and more than 20 programs. Her leadership has made her an invaluable member on numerous boards that serve society’s most vulnerable. She is a general member of the National Advisory Council on Poverty and is serving as co-chair of End Poverty Edmonton, ensuring a focus on reconciliation. Her belief in the power of post-secondary institutions in creating change has resulted in a mutually beneficial relationship with the U of A. Whiskeyjack has been an excellent mentor to U of A academics, helping them build respectful relationships with Indigenous communities, and has taken a leadership role in the Faculty of Extension’s Community-University Partnership for the Study of Children, Youth, and Families. 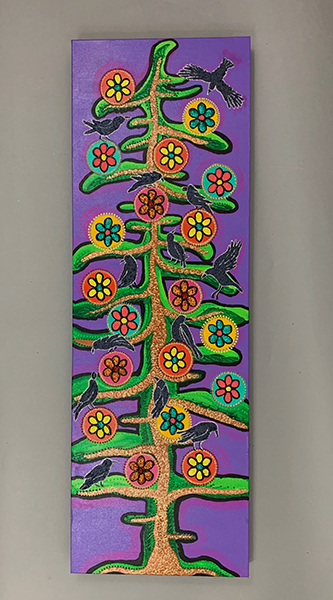 The artist who created this stunning painting is a member of the Métis Nation and of Cree and Stoney ancestry, living in Stony Plain, Alberta. After many successful years working as a teacher, Augenus discovered empowerment and healing through art. She did graduate work in art therapy in the hopes of inspiring others, and today she says that she paints for the joy it brings to herself and others. [ND 249 A384 M44 2019 folio]