The forces of nature and his Aboriginal roots have shaped the spirit and vision of native Albertan Douglas Cardinal, innovative architect, artist, and scientist. His design for the Grande Prairie Regional College won an Award of Excellence from Canadian Architecture Magazine in 1972; he designed the Edmonton Space Sciences Centre, in which he pioneered the development of computer technology and architectural design; and he won the commission to design the Canadian Museum of Civilization in 1983. Cardinal is an Officer of the Order of Canada. 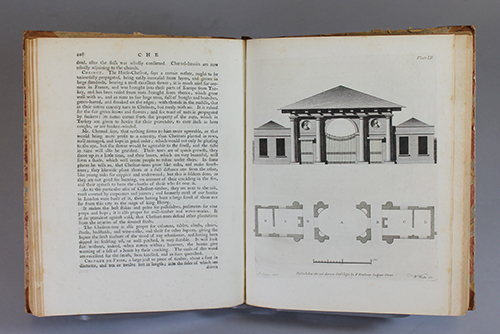 Morris, Robert. Rural Architecture: Consisting of Regular Designs of Plans and Elevations for Buildings in the Country. London: Printed for the author and to be had of him at his house in Hyde-Park-Street, Grosvenor-Square, 1750.

Robert Morris was a major architectural theoretician as well as practitioner. He was a key figure in the rise of the English Country House in the eighteenth century. In this volume, the scarce first edition, Morris sets the rule for a “modern” approach to the design of the country house on the principles of “convenience, proportion, and regularity.” This copy is bound with two other important works of the day, The Builder’s Magazine (1774), and Timothy Lightoler’s Gentleman and Farmer’s Architect (1762). All three works have numerous engraved plates. [NA 7620 M862 1750]

Arthur Hiller is a native Edmontonian who began his career in the entertainment industry with CBC and later moved to Hollywood's television and film studios. He has directed more than a dozen major television series and is an Academy Award nominee (Love Story). Hiller’s many community and philanthropic activities include serving as president of the Academy of Motion Picture Arts and Sciences from 1993 to 1997 and being involved with the Streisand Center at UCLA, the Motion Picture and Television Fund, the Anti Defamation League, and Inner City Filmmakers. 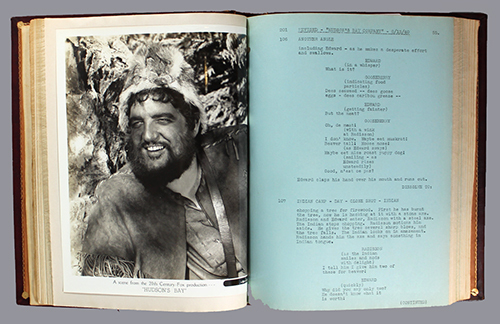 This colourful movie was about seventeenth-century fur trapper Pierre Radisson, who founded the Hudson’s Bay Trading Company with the backing of King Charles II and the assistance of Lord Edward Crewe. The film starred Paul Muni, Gene Tierney, Vincent Price, and John Sutton.  A special and unique volume, this was Sutton’s copy, which he had bound in full red morocco and extra-illustrated with stills from the film. [FC 3207 T76 1940]

John Hume has spent his life in unremitting pursuit of a peaceful solution to the conflict in Northern Ireland. Elected as an Independent to the Stormont Parliament in 1969, he cofounded the moderate nationalist Social Democratic and Labour Party (1979), the mandate of which was to peacefully unite the Irish of different regions, cultures, historical, and economic backgrounds. In recognition of his untiring efforts to find peaceful solutions to the conflict in Northern Ireland, Hume was awarded the Nobel Peace Prize jointly with Ulster Unionist leader David Trimble in 1998. 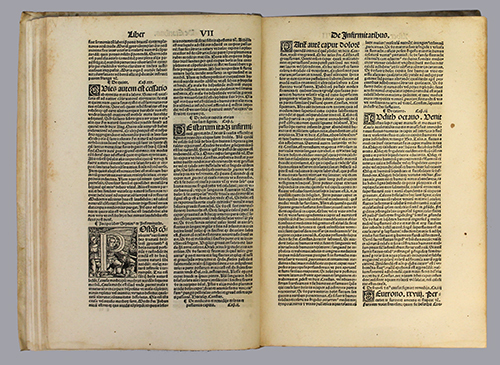 First published in the 1470s, this is a rare, sixteenth-century Latin edition of the first important encyclopedia of the Middle Ages. Immensely popular for more than three centuries, it is still important today for its information on political geography and its accounts of natural history. Among its many entries are discussions on God, angels and demons, psychology, family life, flying creatures, dolphins, whales, and musical instruments. [CB 353 B28 1519]

Alistair MacLeod is a quintessential Canadian writer and one of our most respected literary artists. For over thirty years he has been recognized, nationally and internationally, for his carefully crafted short stories and—most recently—his single novel, No Great Mischief (1999). The novel won a series of important literary awards, culminating with the International IMPAC Dublin Literary Award—the richest and most international of all prizes for fiction given annually for a novel published in English. 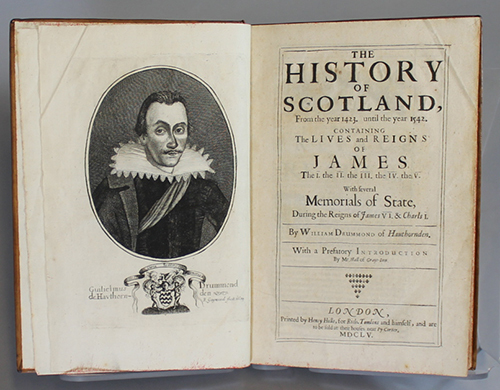 Drummond, William. The History of Scotland, from the Year 1423 until the Year 1542: Containing the Lives and Reigns of James the I, the II, the III, the IV, the V.: With Several Memorials of State, during the Reigns of James VI and Charls I. London: Printed by Henry Hills, for Rich. Tomlins and himself, 1655.

This is a remarkably fine and fresh copy of a surprisingly uncommon first edition of a key work by one of Scotland's major writers, William Drummond of Hawthornden (1585-1649). It covers the reigns of the five Jameses, and was not published until after his death. The volume also contains The Cypresse Grove, his philosophical prose meditation on death. [DA 784 D79 1655]

Allan Markin took on the role as chairman of Canadian Natural Resources Limited in 1989, when the company was in extreme difficulty, and he led CNRL to its current status as one of the largest oil and natural gas producers in Canada. Under his leadership, CNRL contributes to many community causes, and he himself is an outstandingly generous supporter of a number of major initiatives. Both Markin and CNRL recently committed substantial funding to the U of A Natural Resources Engineering Facility. 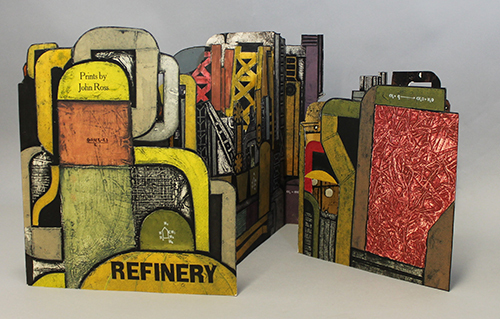 This artists' book is a remarkable 3-D construction of colour images and etchings based on the artist’s drawings of oil refineries in Ploesti, Romania and Sisak, Croatia. The artist writes, “the shapes, forms, and intricacy of petroleum refineries have fascinated me for years.” A major addition to the Peel library’s collection of artists’ books and bookworks, it is one of five copies signed and numbered and issued in a specially-designed green cloth box by Joe DiMarcantonio, with a green and black image of an oil gusher on front cover. [N 7433.4 R79 A6 R332 2000 folio]

Doris McCarthy is known across Canada for her inspiring landscapes that convey the essence of our country. Curators from galleries across Canada that have exhibited her work over the years comment on the unsurpassed quality of her paintings and their singular focus that unites perception, emotion, and place. The first woman president of the Ontario Society of Artists, McCarthy has taught some of Canada's most distinguished artists and continues to mentor many others. 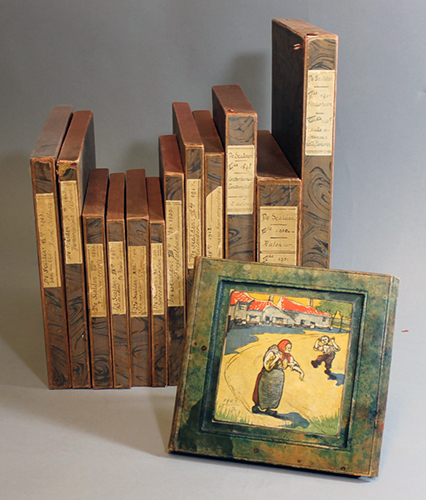 This is a complete run of the publications that showcased the Flemish art group De Scalden, with its spirit of experimentation and Art Nouveau influences. The group illustrated children’s books, calendars, and songbooks, and was involved with architecture, design, and graphic work. This is a beautiful and rare set; only one other complete set is known in North America. [N 6967.5 A75 S23 1st 1897, etc.]

Eric Newell has been Chair of Syncrude Canada since 1994 and CEO since 1989. Under his leadership, Syncrude has become a key player in the western Canadian economy and is on its track to producing 20% of Canada's crude oil by 2007. Newell was named an Officer of the Order of Canada and is the recipient of the ASTech Foundation award for contribution to Alberta science and technology and the 1997 Canadian Business Leader Award from U of A. 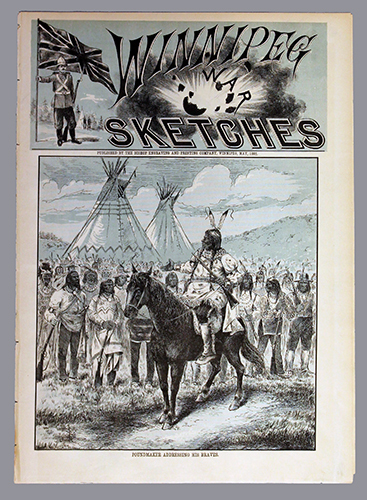 One of the most fascinating contemporary depictions of the North-West Rebellion of 1885, based upon eyewitness accounts and published in Manitoba near the actual occurrences in the Northwest Territories. The rebellion led to Louis Riel’s trial and execution for treason and heralded a new and troubled time in the history of the West. This extremely rare and vividly illustrated paper is one of only four known copies. [FC 3215 W56 1885 folio]

Robert Steadward began his career as an instructor in the Faculty of Physical Education and Fitness at U of A where his teaching style and insistence on high standards were recognized with awards of excellence in teaching. In 1978, he developed the U of A Research and Training Centre for the Physically Disabled—renamed the Rick Hansen Centre in 1987 and, upon Steadward's retirement in 2001, again renamed the Steadward Centre. As president of the International Paralympic Committee for twelve years, Steadward facilitated the growth of an association with the International Olympic Committee, resulting in the Paralympic Games now inextricably being linked with the Olympic Games. 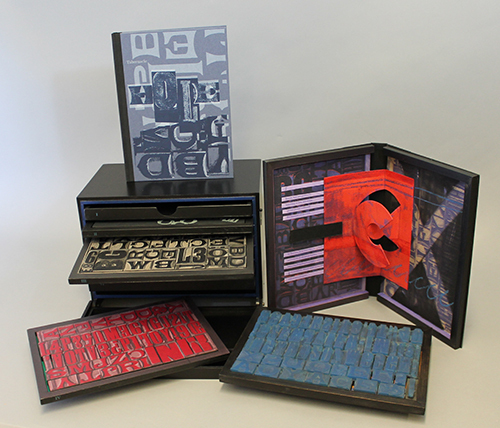 This is an extraordinary celebration of the King’s family history of seven generations of printers - and the masterpiece of King’s inventive work as head of the Circle Press. King has created a wooden cabinet with seven drawers that contain history, poetry (by Roy Fisher), graphic materials, 120 magnetized letters, and 64 rubber-stamp letters, which the reader can ponder and arrange in many ways. Several drawers have been designated for “audience participation.” An instructive and imaginative personal history of printing and an interactive work of art, this is one of 56 sets. [N 7433.4 K54 A6 T113 2001]

Madame Jiang Zehui is noted for her outstanding leadership guiding the Peoples Republic of China (PRC) into developing a national Forestry Action Plan to maintain the balance between the forest ecological system and the forest industry. As president of the Chinese Academy of Forestry (CAF), she is responsible for implementing a mandate to manage more than 40 percent of PRC's forests. She has been the catalyst for a number of highly productive exchanges between Canada and PRC: a collaborative partnership between CAF and U of A was established in 2000. 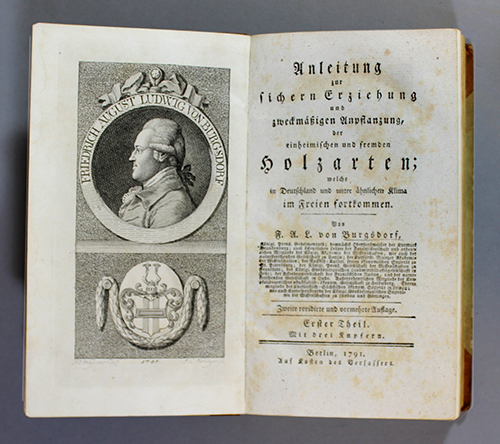 The author was manager of the forests of the Kurmark Brandenburg and wrote several highly esteemed works on arboriculture and forest management. This volume, one of his most important, is devoted to the techniques of cultivating indigenous and foreign trees in Germany. This copy is from the library of His Serene Highness the Prince Furstenberg of Donaueschingen. [SD 391 B87 1790]