A visionary statesman, the Honourable James S. Edwards, U of A alumnus, has earned a Canada-wide reputation for outstanding advocacy for post-secondary education. His term as Chair of the Board of Governors from 2002 to 2006 has been among the brightest periods in the U of A's history. Edwards provided leadership and governance to a number of significant U of A initiatives during his tenure including the merger with Augustana University College, selection of Dr. Samarasekara as the new president, and purchase of the Bay Building downtown now known as U of A Enterprise Square. 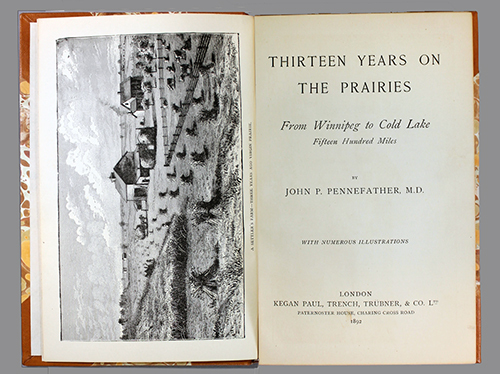 Thirteen Years on the Prairies

John Pyne Pennefather, an English physician, arrived in Manitoba in 1880 to farm for a few years before moving to Winnipeg to practise medicine. During the Riel Rebellion, he served under General Thomas Bland Strange. Following this, he turned to editing medical journals: Manitoba, Northwest, and British Columbia Lancet, Northern Lancet, and the Northern Lancet and Pharmacist. The intent of this copiously illustrated memoir was to describe the climate, soil, and other inducements to emigration to Manitoba and the North-West. [FC 3367.2 P414 1892]

William Fyfe, a Companion of the Order of Canada, is considered one of the world's most distinguished geoscientists for his groundbreaking research on the environmental implications of human energy consumption. Fyfe's numerous honours include Fellow of the Royal Society and Fellow of the Royal Society of Canada (1969); Royal Society of Canada's Willet G. Miller Medal (1985); Geological Society of America's Arthur L. Day Medal (1990); Natural Sciences and Engineering Research Council (NSERC) Gerhard Herzberg Canada Gold Medal for Sciences and Engineering (1992); and the Geological Society's Wollaston Medal (2000).  Asteroid (15846) Billfyfe is named in his honour. 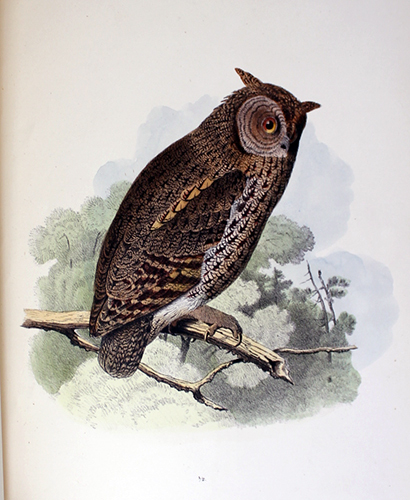 Transactions of the Chicago Academy of Sciences. Chicago: The Academy, 1867-1870.

Transactions of the Chicago Academy of Sciences

Most of the copies of this memorial volume were lost in the Chicago fire of 1869, as was the original journal of Robert Kennicott (1835-1866), an important Ohio naturalist and one of the founders of the Chicago Academy of Sciences. In 1865, Kennicott travelled to Alaska and the Mackenzie River valley, collecting fossils and making detailed notes on the nature of the country. This article by F.B. Meek contains an early, if not the first, description of the Athabasca Oil Sands in print. [Q 11 C62 v.1 1867/1869]

Tom Jackson, Métis musician, actor, and activist, has had a significant impact on Canadian society through his humanitarian efforts and his dedication to making a difference in the lives of the less fortunate. Among his numerous altruistic endeavours, he combined his musical talent with a national effort to end hunger by creating the Huron Carole Benefit Concert Series, an annual cross-county concert tour to raise money for the Canadian Association of Food Banks. Jackson has received both Genie and Gemini Awards and two of his albums have been nominated for Juno Awards. 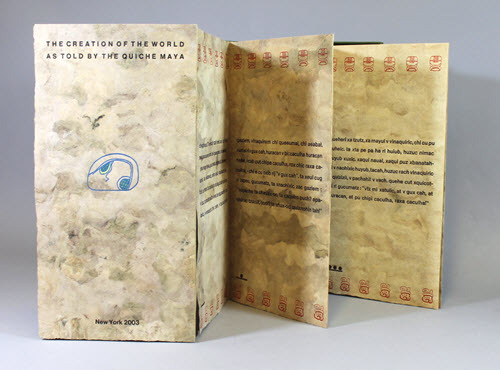 Goetz, Delia. The Creation of the World as Told by the Quiché Maya. Poestenkill, N.Y.: Kaldewey Press, 2003.

The Creation of the World as Told by the Quiché Maya

The Popul Vuh is from Guatamala and considered to be the oldest pre-Columbian book. The text is printed in the Quiché language on paper made from the bark of the fig tree in the Mayan tradition. Along with an English translation the accordion style book is enclosed in a linen box with gold stamping by Judi Conant. An important addition to the Javitch Collection of books about the Aboriginal peoples of North and South America. [F 1465 P8 C74 2003 folio]

Daniel Kahneman is a key pioneer and theorist of behavioural finance and prospect theory, which describes how individuals make decisions under conditions of risk and explains seemingly irrational risk management behaviour in human beings Kahnemen is the recipient of numerous awards including the Bank of Sweden Prize in Economic Sciences in Memory of Alfred Nobel (with Dr. Amos Tversky of Hebrew University, now deceased) for ground-breaking work integrating psychological research into economics. 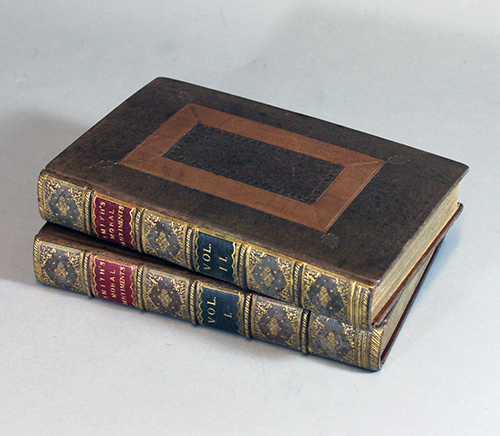 The Theory of Moral Sentiments

This sixth edition of Adam Smith’s first book contains extensive additions and corrections completed by the famous Scottish economist before his death in 1790. When it was first published in 1759 it established Smith’s reputation as a philosopher not only in London but also on the Continent. This copy is bound in contemporary English calf panel bindings. [BJ 1005 S64 T44 1790 v.1-2] 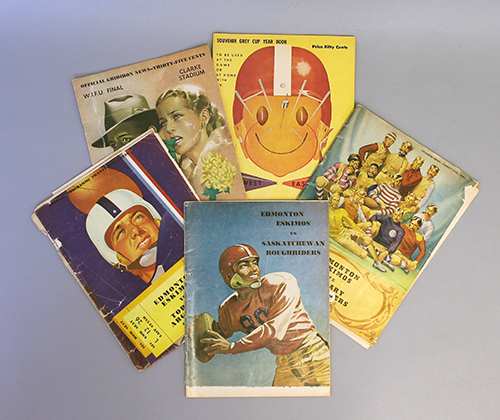 Print Ephemera from the Edmonton Eskimos

This mint collection of Edmonton Eskimos printed ephemera includes game programs, several issues of the Gridiron News, and the Souvenir Grey Cup Year Book for 1954. It was the first year of a three-year reign the Eskimos held under the guidance of the newly hired head coach Frank (Pop) Ivy. The very nature of this type of printed material resulted in a very low survival rate. Its addition to Bruce Peel Special Collections provides an interesting twist to the strong holdings of western Canadiana, particularly the history of Edmonton. [GV 937 G7]

Cécile Mactaggart is an integral figure in the artistic and cultural life in Edmonton and the U of A community. Her unique ability as an art collector is evidenced by a Chinese art and textile collection at the U of A that is reputed to be one of the finest in North America. Mactaggart was awarded The Queen's Golden Jubilee Medal (2003) presented by Lieutenant-Governor Lois Hole, in recognition of her dedicated leadership and community support. 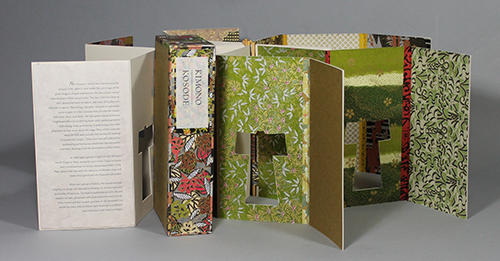 Schwartzott, Carol. Kimono-kosode: A Decorative Study of the Kimono. Washington: National Museum of

Kimono-kosode: A Decorative Study of the Kimono

In this delightful, informative history of the kimono, the artist has used six different Japanese chiyogami papers to represent the variety of fabric designs used in the construction of kimonos throughout Japanese history. The designs are bound between archival boards and secured in a piano hinge binding of wooden dowels designed by Hedi Kyle. The book is an important addition to the Peel library’s very strong artists’ books holdings. [N 7433.4 S399 A6 K56 2001]

Gwyn Morgan, U of A alumnus and outstanding leader in the petroleum industry, is the former President and CEO of EnCana Corporation, the nation's largest independent oil and gas producer. He was recognized as Canada's Outstanding CEO of the Year in 2005, and he is also a recipient of he Canadian Business Leader Award from U of A, the Ivey Business Leader Award from UWO, and the Strategic Leadership Forum President's Award. Morgan is an inductee to the Alberta Business Hall of Fame and a Fellow of The Canadian Academy of Engineering (FCAE). 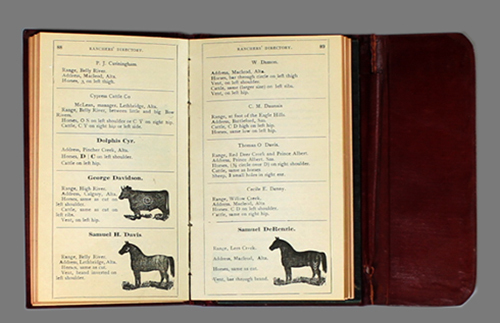 This very rare pristine first edition “brand book” contains the by-laws of the Alberta Stock Growers’ association and the first ordinance to be enacted for the marking of stock. It includes a list of early registered southern Alberta cattle brands as well as the names and addresses of the ranchers who owned them. An excellent addition to the Peel library’s western Canadian holdings and a fitting selection to honour a man who grew up on a livestock farm near Carstairs, AB. [SF 103 H49]

Julie Payette is the Chief Astronaut for the Canadian Space Agency and a CapCom (Capsule Communicator) at the Mission Control Center in Houston, TX. She flew on the space shuttle Discovery as Canada's youngest astronaut and first International Space Station assembly mission specialist. Payette has contributed hundreds of hours to public presentations and school tours, encouraging young people to dream big dreams and to dare to discover their own potential.

NOTE: This profile (like all of the others in this digital exhibition) highlights the accomplishments that inspired University of Alberta to bestow an Honorary Degree and does not reflect the honoree's more recent accomplishments. However, it seems important to acknowledge that Julie Payette went on to serve as the Governor General of Canada. 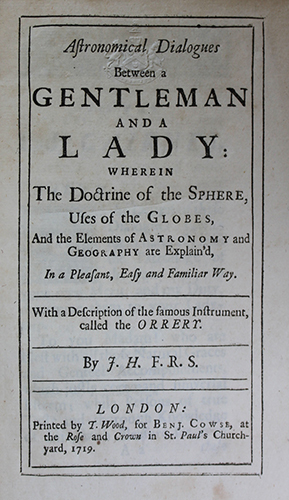 Harris, John. Astronomical Dialogues Between a Gentleman and a Lady. London: Printed by T. Wood for Benj. Cowse, at the Rose and Crown in St. Paul's Churchyard, 1719.

Astronomical Dialogues Between a Gentleman and a Lady

Subtitled, "Wherein the Doctrine of the Sphere, Uses of the Globes, and the Elements of Astronomy and Geography are Explain'd, in a Pleasant, Easy and Familiar Way, With a Description of the Famous Instrument Called the Orrery," this first edition was an early attempt to present the fundamentals of astronomy to female readers. John Harris was a clergyman with an abiding interest in science. He compiled the first English encyclopaedia of arts and sciences in 1704 and a massive collection of voyages in 1705. The work includes six engraved plates, of which the most attractive is that of the orrery made by John Rowley, a noted designer of scientific instruments. [QB 42 H37 1719]

Martha Cook Piper is an outstanding educator and advocate for higher education and research. Her teaching and research have focused on early identification of the developmentally delayed infant and treatment of physically and mentally handicapped children. Piper was named an Officer of the Order of Canada (2003), Educator of the Year by the Learning Partnership (2004), and a recipient of the Order of British Columbia (2005). 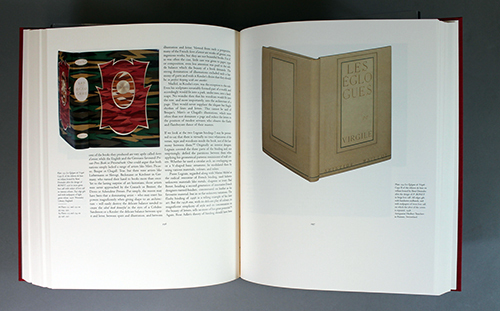 The Book as a Work of Art: The Cranach Press of Count Harry Kessler

Though the Cranach Press was located in Germany, its owner, Count Harry Kessler, was inspired by and became an integral component of the English private press movement in the early years of the twentieth century. Most of the pre-eminent typographical luminaries of the period contributed to the Press’s output, and their work is recorded in this lavishly illustrated book. It includes several essays by noted scholars, extensive documentation, and an illustrated bibliography of the Press. A welcome addition to the extensive holdings of private press books in Special Collections. [Z 232 C84 B83 2005]

Matthew Spence, distinguished U of A alumnus, served as President and CEO of the Alberta Heritage Foundation for Medical Research (AHFMR) from 1990 to 2004, and he assisted with the transformation of the Medical Research Council of Canada into the Canadian Institutes of Health Research (CIHR). Spence is a member of a number of Canadian Boards guiding research and innovation in the medical field. 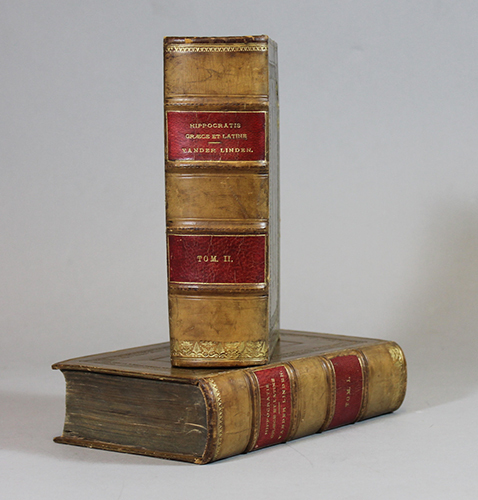 This is a finely-bound collected edition of Hippocrates with the text in Greek and Latin in double columns. Sources indicate it to be the first collection edited by the Professor of Medicine at Leiden, Jan van der Linden. This particular copy has a British Museum deaccession stamp—indicating it is a duplicate—dated 1818. [R 126 H5 1665 v.1-2]

Ken Thompson has contributed to the advancement of society, science, and computers. In 1969, at Bell laboratories with colleague Dennis Ritchie, he developed the Unix operating system, one of the few groundbreaking inventions of computer history. In partnership with colleague Joe H. Condon, he designed and created "Belle," a chess-playing computer, which won the US and World Computing Chess Championships in 1980. Thompson’s research in the field of digital audio compression contributed to the development of the current Map player technology. 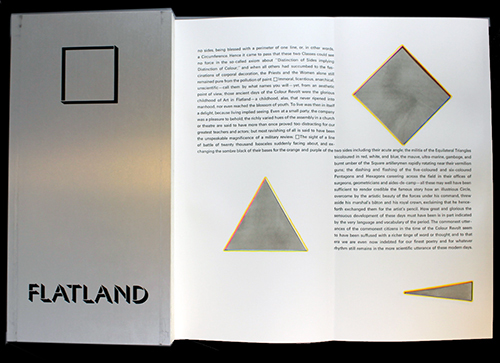 Abbott, Edwin. Flatland: A Romance of Many Dimensions.

Flatland: A Romance of Many Dimensions

Hailed as a precursor of science fiction, this satire about a two-dimensional world vexed by single- and multi-dimensionality has been continuously in print since it was first published in England in1844. This is the eighteenth American edition. The illustrations and binding design express many of the implications of the book. It is bound in aluminum covers in a hinged and clasped aluminum container. [QA 699 A13 1980 folio]