Boris Kochno was personal secretary to Serge Diaghilev, the great Russian ballet master, and in this book he traces the history of the French ballet from fifteenth-century court masquerades to modern ballets. With over 400 illustrations reproduced in photogravure, an original lithograph by Picasso, and a Matisse design on its cover, this is a very special volume. [GV 1649 K62 1954]

This monthly newsletter was published by and for the Dakota peoples. Printed in both Lakota and English, it promoted literacy and offered news relating to the activities and concerns of Dakota peoples during a period of change, including reports from Congress. Each issue features a richly-detailed engraving on its front cover. A very rare addition to the Peel library’s extensive collection of primary materials relating to the Indigenous peoples of North American. [E 99 D1 I27 folio]

The Peel library already has the first edition of this important handbook for educating poor children, but this is the considerably expanded second edition. Sarah Trimmer was a forward-thinking feminist writer who advocated for education and social change. This handbook provides information about setting up soup kitchens, discusses problems associated with child labour, and considers a range of children’s health issues. [LC 5056 G7 T83 1801 v.1-2]

Influenced by both academic painting and Impressionism in France, Maurice Cullen was an influential landscape painter. His earliest important works were exhibited in Montreal in 1897. A true interpreter of Montreal’s cityscape, particularly of dusk and night scenes, which invariably shimmer with light. This is a lavishly-illustrated limited edition of a hard-to-find volume, and is considered to be the most important study of Cullen. [ND 249 C96 J86 1978]

Kerr, John. Curling in Canada and the United States: A Record of the Tour of the Scottish Team, 1902-3, and of the Game in the Dominion and the Republic. Morton, 1904.

A splendid, highly detailed account of the North American tour of the Scottish Team in 1902-1903, an event described as “unique in the annals of curling.” The large volume is lavishly illustrated, and the team’s visits to Toronto, Montreal, and Winnipeg, with the history of many curling clubs, are colourfully set forth. A rare and delightful addition to the library’s holdings documenting Canadian sport. [GV 845 K38 1904]

Richardson, John. Wacousta, or, The Prophecy: A Tale of Detroit and Michillimackinac. A. Waldie, 1833.

This unglamorous volume is actually one of the great rarities of Canadian literature. First published in London in 1832, this is the first edition published in America. Following in the tradition of historical romances by Scott and Cooper, the novel is an imaginary treatment of intrigues and violence between British soldiers and the forces led by Pontiac at Fort Detroit in 1763. [PS 8435 I16 W1 1833]

Colley Cibber (1671-1757) was a well-known actor on the London stage and a theatre manager. His important autobiography, first published in 1740, is sometimes inaccurate. This special limited and corrected edition is lavishly illustrated with portraits of Cibber’s fellow actors and playwrights. A fine addition to the Peel library’s collection on theatre history, which also contains the first edition of Cibber’s work. [PR 3347 Z6 1889]

This is the rare first edition of the first dictionary of dance, setting forth a common language by which to teach, study, and appreciate the art form. Dedicated to Mademoiselle G****, this volume includes sections on dances from China, Egypt, and Canada, and delves into complex concepts of movement, technique and style. [GV 1585 C73 1787]

This is an early edition of a very uncommon, thorough, and significant dictionary of musical terms and concepts, one that reflects many aspects—“modern” at the time—of the Romantic movement in music. [ML 100 B41 1828]

Guts Muths, Johann Christoph Friederich, and C.G. Salzmann. Gymnastics for Youth: Or a

Practical Guide to Healthful and Amusing Exercises: For the Use of Schools: An Essay toward

the Necessary Improvement of Education, Chiefly as It Related to the Body. Philadelphia:

Bosworth, Newton, ed. Hochelaga Depicta: Or, a New Picture of Montreal, Embracing the

Early History and Present State of the City and Island of Montreal. Montreal: W.S. Mackay,

Twiss, Richard. A Trip to Paris, in July and August, 1792. London: Minerva Press,

Siren, Osvald. The Walls and Gates of Peking: Researches and Impressions; Illustrated with

Department of Immigration and Colonization. Land Settlement: Across

Canada with Lord Lovat; Inspection of Farms of New Citizens Brought to Canada

Hoffmeister, Werner. Travels in Ceylon and Continental India: Including Nepal and

Sherman, Thomas. The Second Part of the Pilgrims Progress: From This Present

World of Wickedness and Misery, to an Eternity of Holiness and Felicity; Exactly

Described under the Similitude of a Dream. London: Malthus, 1683.

Muter, Elizabeth McMulline. Travels and Adventures of an Officer's Wife in India,

Jay, Ricky. The Magic Magic Book: An Inquiry into the Venerable History and

Whomsoever Bloweth on the Pages, If He Be Versed in the Secret Method, May

Cause the Images to Appear, Vanish and Change at Will Several Times] Adorned with

Original Renderings from the Ateliers of These Esteemed Delineators of Artistic

Impression: Vija Celmins ... Embellished with Ancient Iconography from the

Collection of the Author of This Curious Compendium. New York: Library Fellows of

Carmichael-Smyth, Robert. The Employment of the People and the Capital of

Great Britain in Her Own Colonies: At the Same Time Assisting Emigration and

Penal Arrangements by Undertaking a Great National Work ... All This Fully

of "The Clockmaker": Containing Thoughts on the Subject of a British Colonial

Railway Communication between the Atlantic and the Pacific. London: W.P. 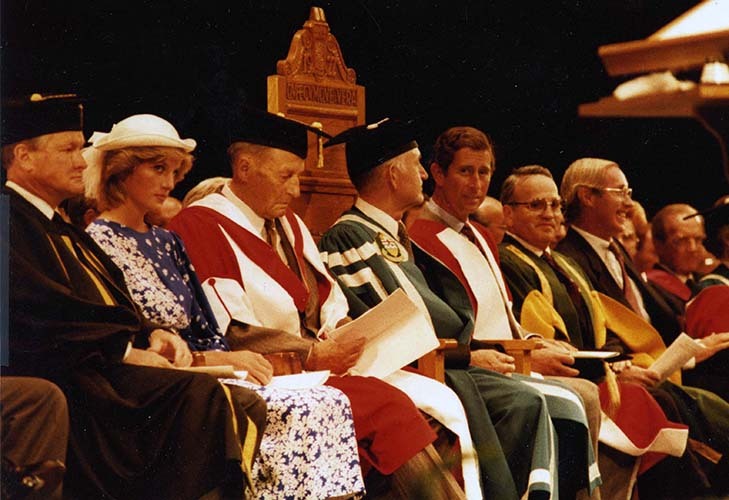 Convocation Ceremonies in 1983. Image courtesy of

Bull, William Perkins. From Rattlesnake Hunt to Hockey: The History of Sports in Canada

United States Census Office. Report on Indians Taxed and Indians Not Taxed in the United

States (Except Alaska) at the Eleventh Census, 1890. Washington: Government Printing

Piozzi, Hester Lynch. Retrospection: Or, a Review of the Most Striking and Important Events,

Characters, Situations, and Their Consequences, Which the Last Eighteen Hundred Years

Blake, William. An Island in the Moon: A Facsimile of the Manuscript. Cambridge and New

Sedgwick, Catharine Maria. The Linwoods, or, “Sixty Years Since” in America. New York:

Curll, Edmund. Faithful Memoirs of the Life, Amours and Performances, of That Justly

Celebrated, and Most Eminent Actress of Her Time, Mrs. Anne Oldfield; Interspersed with

Chateau Lake Louise. What to Do at Lake Louise in the Canadian Pacific Rockies. Lake

Warriner, Francis. Cruise of the United States Frigate Potomac round the World, During the

Years 1831-34, Embracing the Attack on Quallah Battoo, with Notices of Scenes, Manners,

etc., in Different Parts of Asia, South America, and the Islands of the Pacific. New York: 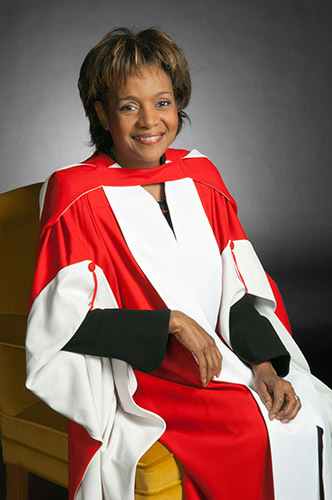 Michaëlle Jean received an Honorary Degree from University of Alberta in 2008.  Image courtesy of U of A photographer Richard Siemens.

Green, Sarah. Mental Improvement for a Young Lady on Her Entrance into the World:

Bird, Robert Montgomery. Nick of the Woods, or, the Jibbenainosay: A Tale of Kentucky.

Ferrero, Edward. The Art of Dancing, Historically Illustrated. To Which is Added a Few Hints

on Etiquette; Also, the Figures, Music, and Necessary Instruction for the Performance of the

Smith, Charlotte. Rural Walks, in Dialogues: Intended for the Use of Young Persons. London:

D’Azevedo, Warren L. Straight with the Medicine: Narratives of Washoe Followers of the Tipi

Strutt, Jacob George. Sylva Britannica, or, Portraits of Forest Trees, Distinguished for Their

Travels throughout the Old and New World, from the First Ages to this Present Time:

Illustrating Both the Ancient and Modern Geography: Containing an Accurate Description of

Davis, Roger. Kendrew of York and His Chapbooks for Children. Wetherby, England: Elmete

Sanders, Daniel Clarke. A History of the Indian Wars with the First Settlers of the

D'Urfey, Thomas. A Common-Wealth of Women: A Play, As It Is Acted at the Theatre Royal

by Their Majesties Servants. London: R. Bentley and J. Hindmarsh, 1686.

M’Leod, John. Voyage of His Majesty's Ship Alceste to China, Corea, and the Island of

Lewchew: with an Account of Her Shipwreck. 3rd ed. London: John Murray, 1819.

Brown, Charles Brockde. Arthur Mervyn, or, the Memoirs of the Year 1793. Philadelphia:

Great Britain. An Act to Make Further Provision for the Regulation of the Trade with the

Indians, and for the Administration of Justice in the North-Western Territories of America 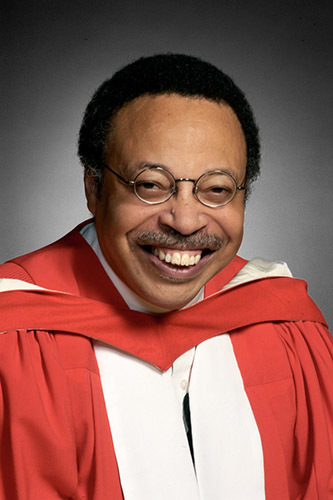 George Elliott Clarke received an Honorary Degree from University of Alberta in 2005.  Image courtesy of U of A photographer Richard Siemens.

Luckidad's Garland, or, When My Old Hat Was New.

No.1 in a volume with binder’s title

Editor of the Letters of Maria. The Lake of

Siberell, Anne Hicks. He Had Just Come Back from

Golding, Arthur. A Moral Fable-Talk: That Is to Say, a Most Delectable Garden of Moral

Curle, J. H. (James Herbert). The Gold Mines of the World; Written After an Inspection of

Cruikshank, George. The Bachelor's Own Book, or, the Progress of Mr. Lambkin.

Freud, Sigmund. The Ego and the Id. London: Leonard & Virginia Woolf at the

Bunyan, John. The Holy War, Made by Shaddai upon Diabolus, for the Regaining of

the Metropolis' of the World; or, the Losing and Taking Again of the Town of

In partnership with the University Senate, librarians at Bruce Peel Special Collections began selecting books to celebrate honorary degree recipients in 1987 so that is where this record ends. Honorary Degrees have been awarded by the University of Alberta since its founding in 1908, and a complete list of recipients can be found on the Senate website here.